Call for donations for direct support of illegalized refugees on the Balkan Route:
We are a network of activists, who work at the borders of Serbia,
Macedonia and Greece in order to support people who flee their countries
in a direct and informal way. 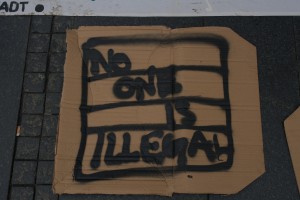 The conditions at the borders are becoming increasingly more precarious and there is a need for basic supplies, many people depend on self-organized humanitarian and political support structures. Especially illegalized refugees who don’t have access to food, clothes, and medical supplies. With the new agreement between the EU and Turkey, and the
Balkanroute officially being shut down, many people are stuck at the borders and trying to find ways to overcome them. These ways are often dangerous and violent: it means crossing whole countries and mountain areas by foot and it means being exposed to mafia and very violent police repression. These people need our support and solidarity!

Due to very high police repression, the local structures can only act in
the offical camps. We are in close contact with them and they are very
happy for the international help.

We support people with food, basic supplies and information. But since
there are less and less people who make it across the border, we also
research and plan other ways to support them.
Our work is non-governmental, independent and informal – so it depends
on money donations. We need money to pay for our transport within the
project, the costs to rent an office/storage room, the supply we give
out, the phones and technical items we need in order to hold up our
info-network.

Donations can be sent on the following bank account and can be transferred to us directly:

Stay informed:
Updated information about the development of the situation:
www.openborder.noblogs.org
Facebook: „OpenBorder Osnabrück“ and „Dresden-Balkan-Konvoi“.

Background information:Since a long time people are crossing fences and borders of fortress
Europe and are fighting for their right of freedom of movement. Many of
them come from conflict regions and are traumatized by violent
aggressions they experienced during their journeys. They receive diverse
support by people in solidarity, even though most of the European states
react with deterrence and closure.

More and more states along the Balkan route are closing their borders
with high-tech fences financially supported by states of the EU. These
borders are being monitored by international and NATO military in the
Agaeis. On an EU-level hostile agreements to stop migration and to
reinforce the militarization of borders are being implemented. Thousands
of people are stuck on the Greek-Macedonian and Macedonian-Serbian
border under very difficult conditions.

The attempts of refugees to organize themselves for political actions
and crossing of the borders are met with repression, teargas and
physical violence. Also, the closure of the border results in the shift
of flight routes, so that people have to choose more and more risky ways
to reach central Europe. But the militarized borders won’t stop
migration! They only cause injuries and death.

Illegalization has the consequence that people can’t use public
transport, walking by foot on dangerous, hidden routes. They are exposed
to criminal attacks, police violence, robberies, trafficking and illegal
push-backs. For these reasons support by people in solidarity can be
very helpful. Compared to the situation in Idomeni the specific
circumstances in Macedonia are less present in German media and
political discourse.

We don’t experience a “refugee crisis” but a political crisis! Whenever
people have to flee because of local and international political
failure, we must not incriminate and illegalize them. Political and
humanitarian support must be guaranteed for everyone, no matter if they
are fleeing from war or structural discrimination and poverty. It is
essential to take into account all of the different causes of
migrations, which are also created and enforced by Europe and Germany.
The political responsibility of Europe should be the protection of human
rights instead of the protection of borders!