We are a group of noborder-activists from all around and spend our time in Belgrade since weeks to support people on the move with their journey through Serbia. we deliver hot chai around the bus station two times a day to 100-200 people and inform about the situation further north. Also, we established and help running the self-organized „No Border Hostel“, a squatted building in the city center, where around 30-50 people per night find shelter without the hustle of official registration like in the camp far out the city center. We formed a collective together with local groups and individuals around this place and work hand in hand to keep good spirit up.

On the coming Sunday Serbia elects a new shitty government. For that event the municipality decided to get rid of the refugees in the city center and cleaned the parks yesterday with water early in the morning, weeping away all proof of ongoing inhumane conditions here. Sleeping people were not warned and many were sprayed wet in the cold. European-union-paid-garbage-collectors of the commissariat for refugees (see picture!) and police collected all sleeping bags, mats, tarps, tents and personal belongings as clothes or shoes and filled up two large dumpsters. The parks were shiny afterwards – many lost their sleeping places for the next cold nights. At the moment no ngo is allowed to give out sleeping equipment, not even covers. People without the right papers and appearance are only allowed to sit and walk in the park. The police harassed people in the day and checked for papers. In the evening, the municipality „invited“ all refugees to come to the „open camp“ in Krnjaca outside the city by bus. Only 20 persons went on the busses while all others had to find new sleeping places. For the same night the squat got a non-official eviction notice from city officials, today the threat was repeated. But solidarity in the collective is big, many came in the afternoon & evening to protect the squat from eviction – some people slept there together with the refugees. Facing a situation in which people don’t even have access to the least equipment to sleep outside in the parks, the squat becomes even more an important and trusted space to rest for people on the move. Activists around Belgrade seem to be motivated to keep this place running and support against eviction and police repression is confirmed by numbers of people showing up every day. Vacancy in the city is obvious and it’s just a matter of time more squats should pop up. 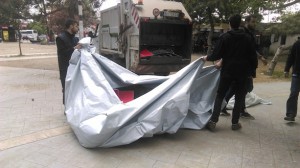 Some say that all this harassment in the city center against people on the move will end as soon the election circus finished. Others expect harsher conditions in the so far „refugee-friendly-whatever-humane-serbia“. To understand the whole better we closely observe the recent happenings in Greece, especially in Chios, Lesvos, Piraeus and Idomeni. Evictions and police repression against refugees and supporters seem to enhance. Please keep us updated about your struggles!

Still and always – no border, no nation!